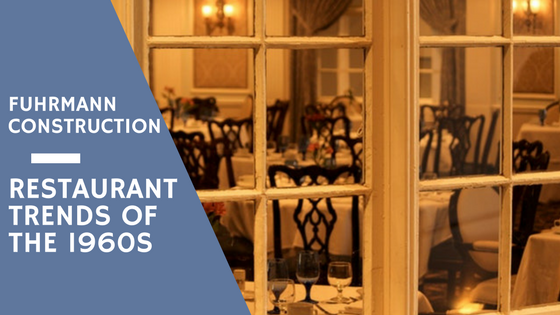 The decade of peace and love was a unique time in history; one that revolutionized the way the western world thought about itself, and ultimately made a lasting impression on how its been perceived ever since. As with all culture shifts, one of the most powerful signifiers of the 60’s was it’s culinary and restaurant design trends.

The 60’s were unique because they saw the US and Canada emerge with a new mindset, one that welcomed and emphasized the importance of diversity, togetherness, and – for lack of a better word – love. The flower power of the 60’s spilled into the trends of the era like none before it. In this post, we’ll outline some of the most popular restaurant design trends and food booms of the 1960’s.

The 1960’s, it seems, sought to step away from the lasting trends of the 50’s – trends that saw the rise of processed, pre-packaged foods and simplicity and ease over health and wellness. The 1960’s saw a rise in European cooking techniques, more complex recipes and flavours and more worldly infusions of ingredients.

Big time fashionable foods in this era had a distinctly French influence, popularized by famous chef Julia Child and her “Mastering the Art of French Cooking” book. The dinner tables of the 60’s were often covered in steaks, caesar salads, barbecued meat, and saw the rise of the cocktail party as a pre-dinner event worth celebrating unto itself. The 60’s also helped ethnic foods like Japanese and Indian cuisine infiltrate a society steeped in hamburgers and fast food.

However, ready-made foods were still gaining traction in the western world. Instant foods like bagged mashed potatoes, instant coffee, and cool whip were all the rage in the 60’s – all marketed towards baby-boomer children.

The added difficulty and complexity of popular 1960’s dishes like Beef Wellington, for example, prompted a rise in the classic dine-in restaurant, placing a large emphasis on customer satisfaction. Restaurants were sometimes even modeled after the rise of other interior design trends of the times, like the conversation pit, an intimate space in the home wherein a lowered space was meant to increase conversation. In the 1960’s food and dining took back its cultural relevance as a time when people should be together, conversing, and exchanging ideas, sharing, etc.

Big bold colours were also used, reminiscent of the era. Prints and metal were used in interiors and kitchen spaces to emphasize cleanliness, boldness, and a futuristic look. Many designers today would say that restaurant and interior design in the 60’s was a bit of a melting pot of everything – opting to shake off the formalism of the 40’s and 50’s while blending materials, time periods, and colours to depict a new philosophy of life.

About the Author: Peter Fuhrmann

With over 25 years as a general contractor of commercial office, retail store tenant improvement & renovation projects in the greater Vancouver area; I found the growing need to help business owners do the due diligence needed to define early on project feasibility and requirements as well as construction costs. This need evolved into a full service project management and site co-ordination approach... BUILT BETTER BY DESIGN

FREE ESTIMATE OR NO OBLIGATION CONSULTATION

LET’S TALK ABOUT YOUR PROJECT