The Dangers of Design Purgatory & How to Avoid It 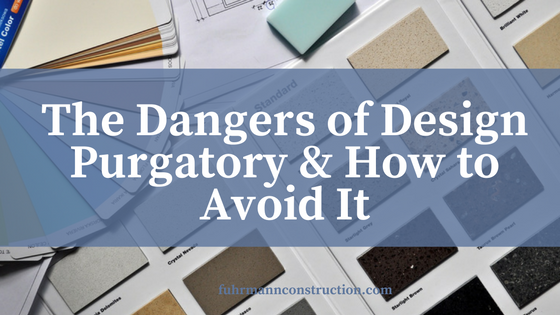 Defining design as a constantly forward-moving process is plain foolish. Design is no different than any other critical thinking process, building plan or strategy for that matter. It’s subject to changing trends, ideologies, thoughts and personalities – of both the designers themselves, and the market to which they’re building for.

It’s for this reason we as builders and designers try to assist in avoiding design purgatory, or an isolation of ideas unable to move forward. Purgatory in this sense is the halted sense of progress, it’s nitpicking over the small stuff, it’s overshooting on ideas that aren’t useable or doable, and it’s trying too hard to create an illusion of control.

Like many aspects of life, it’s important to be able to step back and admit something’s not working – or realizing that it’s not going to exist as-is for long.

Designs are not finite. They change and adapt to emerging trends in markets, conscious thinking, and the ideologies of customers. Thinking designs are going to stand the test of time is foolhardy and daring – to say the least.

In this post, we’ll discuss how can designers and owners avoid design purgatory.

If designers – and customers, for that matter – perpetually nitpick over small insignificant details of a build or a design, the entire team will end up delegating the wrong tasks and can end up focusing too closely on time-consuming elements that can stress schedules, production times, launches, and resources.

Leaders should know well enough to not delegate jobs that they themselves will inevitably end up nitpicking over. We all have specific parts of our professional personalities that have to be done a certain way – it’s best to get those things done with time to spare, rather than trying to pawn them off on others to create a sense of teamwork and collaboration. Delegation of tasks has to be done with a critical eye for progress and inherent value. For example, if your customer has made it known that they’re particularly picky about colour palettes – let them pick colours early on, and carry on with the design in mind. Eliminate the possibility for nitpicking early on catering to people’s unique abilities and strengths.
Is it Doable?

This is a big one that contributes to design purgatory in just about every conceivable angle. When undertaking a new design or build consider what you’ve been asked to do, and whether or not it’s reasonably achievable given your set of restraints; ie budgetary, timing, creative freedom, etc. Feel good about rejecting ideas that are overly difficult to accommodate, and let your partners, customers and designers know early on, exactly why their requests aren’t doable.

This could include things like wishful finishes, pricey materials that aren’t in the budget, revamps to layout plans when you’re under a tight deadline, etc. If something isn’t doable, rule out is possibility early on so you can proceed with a viable alternative through brainstorming similar possibilities.

It’s even more important in these instances to not flat-out shoot down someone’s lofty ideas. Instead, reach out for some meaningful design collaboration – contribute your thoughts and concerns, and invite an open-minded conversation. Rejection is equally as capable of halting your progress as costly delays.

Adapt and Move On

Nitpicking over impossible tasks or design elements is not only illogical, but is also extremely common. This idea of nitpicking over seemingly undoable tasks gives us the distinct illusion that we’re still in control and are trying to overcome the given hardship through innovation.

But, a bad idea is a bad idea at the end of the day. When presented with such an idea, it’s best to maintain control over something we already have access to: adaptation. If designers, customers, and designers can collectively learn to stop prodding at a dead idea and begin to examine alternative ways of accomplishing a similar goal, we embrace our adaptability and eliminate the possibility of sitting still for too long.

Believe in your abilities, and believe in your teammates. If adapting still proves as difficult as the original idea, don’t be afraid to move on. Justify your decision, scratch that item off your list and forget about it.

Be Selective About the Feedback You Want to Receive

Communication is a powerful tool in design. It’s the vessel for which great ideas are allowed to flow, and can grow with collaboration and teamwork in mind. Communicating issues, ideas, and solutions is the lifeblood of any project, design or otherwise. That being said, communication has its limitations in terms of its usefulness. Leaving questions and communications perpetually open to discussion can help foster an ongoing opportunity for unnecessary changes, constant design fluctuations, and evolution of thinking.

Like all good things, too much can become a bad thing. Define and be selective to your client, or your designer about the types of feedback you’d like to receive. This can be helped along by carefully crafting your words to exclude open-endedness that can contribute to excessive or unnecessary feedback. Instead of asking: “what do you think?” ask “how can we strengthen _______.” Specify the types of information you’re looking for to help give direction to communications.

As well, route your communications through the decision-makers on the other side of the table. Enabling communication be available to every team member will inevitably create confusion and result in delays and changes to great ideas.

If a client is constantly making changes to colours, materials, design layouts or other ideas important to the progression of a project, be firm on budget and schedule limitations.

If, say, by the third of fourth change to interior colours, state that – yes, these changes can be made, however, we’re out of scope from our original contract. These perpetual changes are going to constitute a revised proposal, a new contract, and additional charges for consideration.

This is pivotal to the economic viability of builds in terms of scheduling, availability and pressing deadlines like retail location openings, product launches, etc. A lot of the time, your customer will think long and hard about revamping a plan for the fourth time after finances and availability become an issue.

About the Author: Peter Fuhrmann

With over 25 years as a general contractor of commercial office, retail store tenant improvement & renovation projects in the greater Vancouver area; I found the growing need to help business owners do the due diligence needed to define early on project feasibility and requirements as well as construction costs. This need evolved into a full service project management and site co-ordination approach... BUILT BETTER BY DESIGN